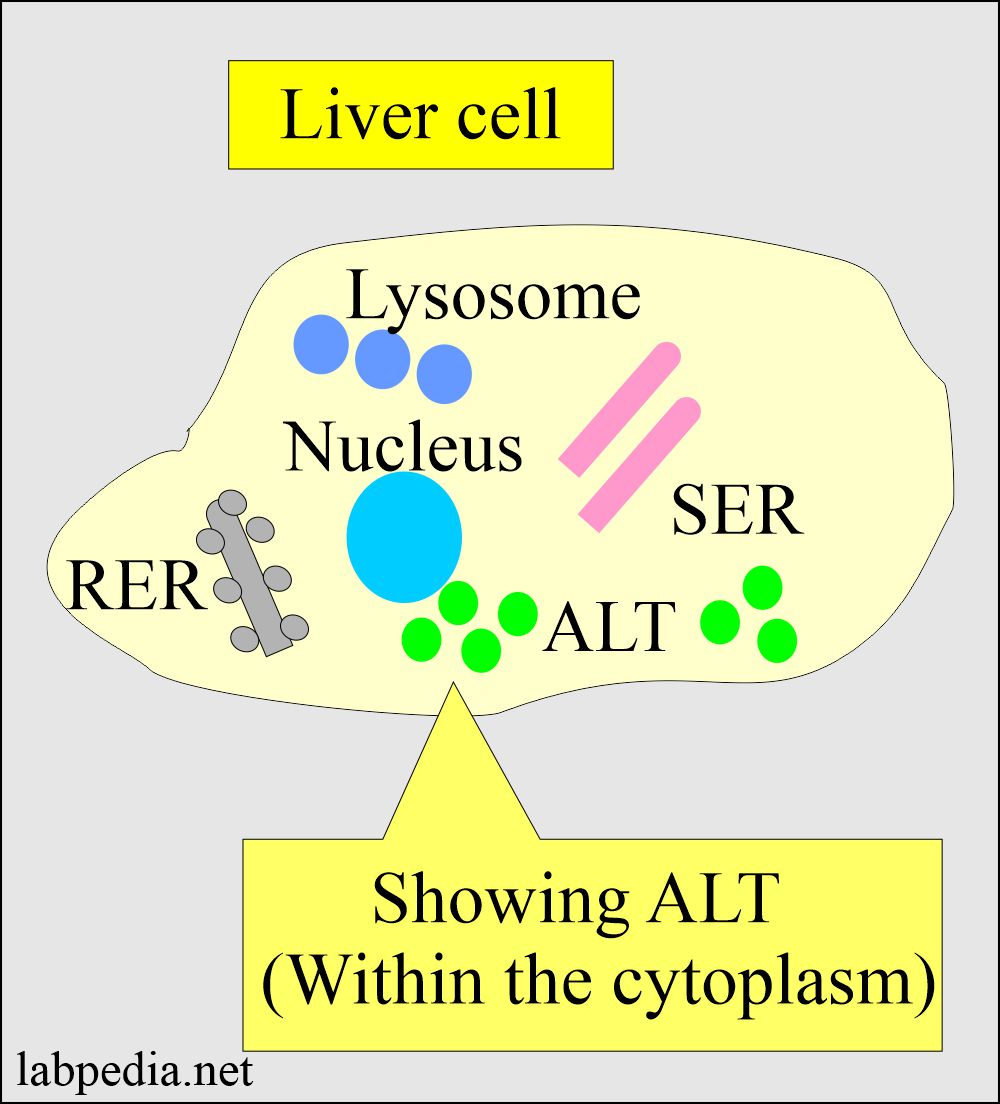 SGPT distribution in the liver cell

The increased SGPT (ALT) level is seen in:

Table showing the increase of SGPT in various conditions:

Critical value = >9000 U/L  seen in Alcohol-acetaminophen syndrome.
This level can distinguish from alcoholic or viral hepatitis.

You should have a complete Liver function test and viral hepatitis profile. Keep on checking SGPT and SGOT at least every three months.

Dear
This SGPT is raised. Please advise complete liver function test with viral profile HBV, HCV. Then best is to consult some good hepatologist or physician.

You should have a complete liver function test and hepatitis profile (HBV, and HCV). If these are abnormal then consult the physician.

Good day,
my sgpt is 56 U/L
my sgot is 59 U/L
I’m 34 y/o male. had muscle pain a few days ago due to my new squat exercise routine before taking this test. Is my muscle pain connected with my sgpt sgot levels? should i be worried? thank you

Dear SGOT/SGPT are raised. You should have total bilirubin, direct and indirect, alkaline phosphatase, and gamma GT level. If these are raised then please consult physician for further work-up.

Sure it is normal.

Hi i am 24 year old female i have SGOT 52and SGPT 81.5 what should i do. Else every thing in my liver and blood profile is normal.

Please check your hepatitis viral profile. Please rule out any medication. Even aspirin can disturb the LFT.

i m covid patient and my SGPT is 101. and CRP lavel is 0.6 so please suggest what to do

Please advise complete liver function tests to find any other abnormal values. You definitely need treatment for the Covid. Now, a day’s most doctors are prescribing steroids. Please consult some good physicians.

It is the upper limit. Please advise the complete liver function test.

SGOT is normal, but SGPT is mildly raised which may be due to some medicine like Aspirin. Please repeat after 2 weeks.

Mostly your tests are in the normal range. I don’t think so. If you have any symptoms then consult a physician and do the tests which he/she thinks are needed.

MY SGPT is 28 U/L and (HBV) DNA is Undetected. What kind of prevention should taken by me . I am just 35

Vaccination for HBV infection is available. I will suggest you get vaccinated.

Hi Dr. Riaz, I am diabetic patient and a stone in my gallbladder with no pain, four months ago SGPT result was 44 U/L , recent test result SGPT is 66 U/L. my age is 41.

Most tests are normal except for SGOT and SGPT. Please rule out alcohol intake and pain killers.

Is their any thing serious ?

I can say this is raised. You should do a complete liver function test. I will suggest repeating your test after 2 to 3 months.

These levels are in the normal range; I don’t think is serious. If you are very conscious, repeat liver function tests (LFT) after 2 to 3 months.

SGPT is slightly raised. You should have done a complete liver function test (LFT).

AST/ALT ratio and A/G ratio are not normal as per the above. Kindly analyse and advise.

Your LFT values are normal. I may not give importance to calculated values unless the values were abnormal.

FBS, HDL, VLDL are in the normal range. LDL can be decreased more. Your Liver function tests are abnormal. You must consult a hepatologist.

Your SGPT and SGOT are mildly raised. Please get detailed liver function tests and viral hepatitis profile (HBV, HCV). I hope you are not taking painkillers or alcohol or any other drugs?

Your SGOT and SGPT are slightly above the normal value. But your TSH (If it is mU/L) level is too high, indicating hypothyroidism. Hypothyroidism can lead to feelings of fatigue. Please read the following link and have a complete workup of thyroid functions.
https://www.labpedia.net/thyroid-part-2-thyroid-stimulating-hormone-tsh-thyrotropin/

SGPT represents a problem in the liver, and SGOT should also need to be raised. This is an unusual picture. I will advise repeating complete liver function tests and viral hepatitis markers as well.

SGPT 139 is increased. HBV PCR value needs their normal range. It would be best if you had a physician consultation for the treatment.

Only your SGOT and SGPT are mildly raised. Rest all tests are normal. I will advise eat more fruits and repeat only these two tests after 2 to 3 months.

Does low uric acid in plasma or serum, an indication of any kidney disorder?

You have not told how low is the blood uric acid level. Please read the following link, and this may be helpful for you.
https://www.labpedia.net/uric-acid-level-blood-uric-acid/

Your LFT is abnormal and needs a consultation by the physicians.

SGPT is slightly raised, but SGOT is normal. Please repeat both tests after one month. Take more fruits during this period. Avoid aspirin.

SGOT looks normal and SGPT slightly above normal. My suggestion is to repeat the LFT (SGPT) after one month.

Hello sir
My wifes sgpt 34 and sgot is 42.she is 7 months preganant.. Also she is taki g aspirin as per doctors advice..is thia range is normal?

These values are normal. Because the aspirin may increase SGOT, when she stops aspirin, I hope SGOT will also be below 40. Give her more fruits that may help her.

What about d dimer sir..

What about d dimer sir?

Your LFT is abnormal; you need further workup like complete LFT with gamma-GT. Ultrasound of abdomen. If you are using alcohol, first quit and recheck LFT after one month.
If no improvement, then consult a hepatologist or gastroenterologist.

Sir my LFT test is
SPGT LEVEL 199
SOGT LEVEL 65
BILUBRIN LEVEL 0.80
IS IT IN DANGEROUS LEVEL

Your liver function tests (LFT) are abnormal. No doubt, bilirubin is normal. This needs to rule out liver cell necrosis like alcohol intake, viral hepatitis, and some drug use.
It would be best if you had thorough work up to find the cause of abnormal LFT.

please suggest. Is it critical?

Your SGOT, SGPT. and Gamma GT is raised. It would help if you had further workup to rule out any disease of the liver. Please consult the physician for further workup.

Thank you so much Dr. Riaz
You ease my worries. Thank you for helping me.
More power and Godbless

SGPT level fluctuations mean that some minor injury in the liver, the causes may be viral hepatitis C, alcohol intake, some pain killer medications. You have to rule out these possibilities.

Thanks for the replay dear , few month ago i was sick and i used antibiotics medicines for 20days, after that is issue is rise ( increase of sgpt) i don’t use alcohol..
i used using the Estar tablet 10mg twice in a week, is this tablet is harmful in high SGPT or not please answer on this,,, and today on 5//9/2021 i repeat my sgpt test that was 61 befor is that was 77 in last week,,, i try to control this on proper diets,, actually im food lover and i like to eat fish and meals but now a days im on diet,, is this problem can be handle on diet or i need to visit doctor
thanks again for your replay to my message Doctor

Your LFT is definitely abnormal. I will suggest consulting some hepatologist or gastroenterologist.

Thanks
yes i have ulcer problem from last 7 year …i just want to know that ,can i use Estar tablet 10mg , because if i dont use this tablet then i feel bad

I will see the link sir .. and thanks for your help I will remember you in my prayers

I will say that these tests are normal and no need to worry.

SGOT is normal, and SGPT is boerder-line. Please take more fruits and repeat the liver function test after one month and then let me know the result.

Your SGOT/SGPT are mildly raised. You need to worry and find the cause like viral hepatitis, and some drugs may increase. Better consult a physician to find the cause.

I think your SGOT/SGPT is raised due to alcohol intake. I will suggest stopping alcohol for at least 2 to 3 months till these enzymes are normal. Then you can take off and on alcohol but not regularly. Otherwise, you will develop cirrhosis of the liver, which ultimately leads to liver failure.

Dear Dr. Diaz
I wonder why AST is specifically more elevated in case of periportal necrosis in Preeclampsia ?

You may see hypertension, proteinuria, oliguria, pulmonary edema, thrombocytopenia, and elevated transaminase level in preeclampsia. I think these are the complications of preeclampsia.