The lymphomas  are monoclonal in origin.

Rappaport 1996 Defined that It is neoplastic proliferation of Lymphocyte, Histiocytes and reticulum cells in lymphoid tissue in the body. It is most common in Lymph Node.

This is a Misnomer because it spreads from single Lymph Node to chain of Lymph Node and distant nodes. It also spreads to liver, spleen and Bone marrow where it gives leukemia phase.

It is a special variant of NHL (PDL)

Lymphomas are classified into :

Confusion for classification is due to:

3.     Failure to differentiate between Lymphocyte and Epithelial cells.

Reason for classification of NHL:

Well known classification of NHL are :

Classification of lymphomas by Rappaport

Rappaport classification is based on cytologic cell division like :

Drawbacks of above classification are :

These lymphomas are divided into grades on the basis of survival of the patient.

There is consideration of B and T lymphocytes.

Following diagram  shows the differentiation of the cells when stimulated by antigenic stimulation. 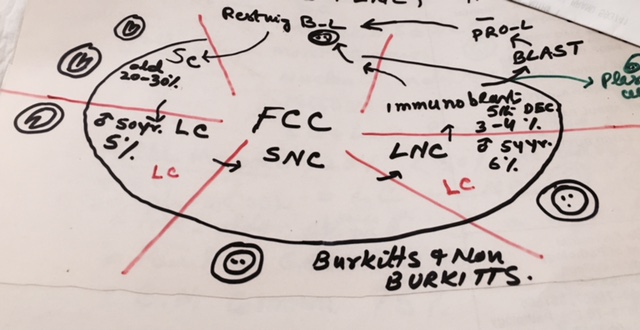 These are 40% of the adult Non-Hodgkin’s lymphoma.

There are types of :

Chromatin is dispersed and nucleoli are indistinct.

Nucleoli are prominent and are 1 to 2.

Nucleus is vesicular and cytoplasm is pale.

These are aggressive lymphomas. Often cured by chemotherapy.

There is high proliferative index which make more susceptible to cytotoxic drugs.

There are wide morphologic changes.