There are three compartments:

The liver is an exocrine organ and it has metabolic functions.

Kiernan in 1833 introduces the concept of lobule which measures  0.5 to 2 mm in diameter with 4 to 5 portal spaces.

Rapaport et al in 1945 introduced the concept of the functional unit which is called acinus or metabolic lobule. This concept depends on oxygen supply and nutrients.

Zone I: This zone has the best blood supply and prone to most toxic injuries. if an injury occurs in this zone, well be the first to regenerates. In this zone glycogen synthesis, glycogenolysis, protein, and formation of plasma protein take place.

Zone II: in this zone, there is reasonable blood supply, it shares function with zone I and zone III

Zone III: This zone has the poorest blood supply and prone to more hypoxic injury. In this zone, there is glycogen storage, lipid, pigment formation and metabolism of drugs and chemicals. 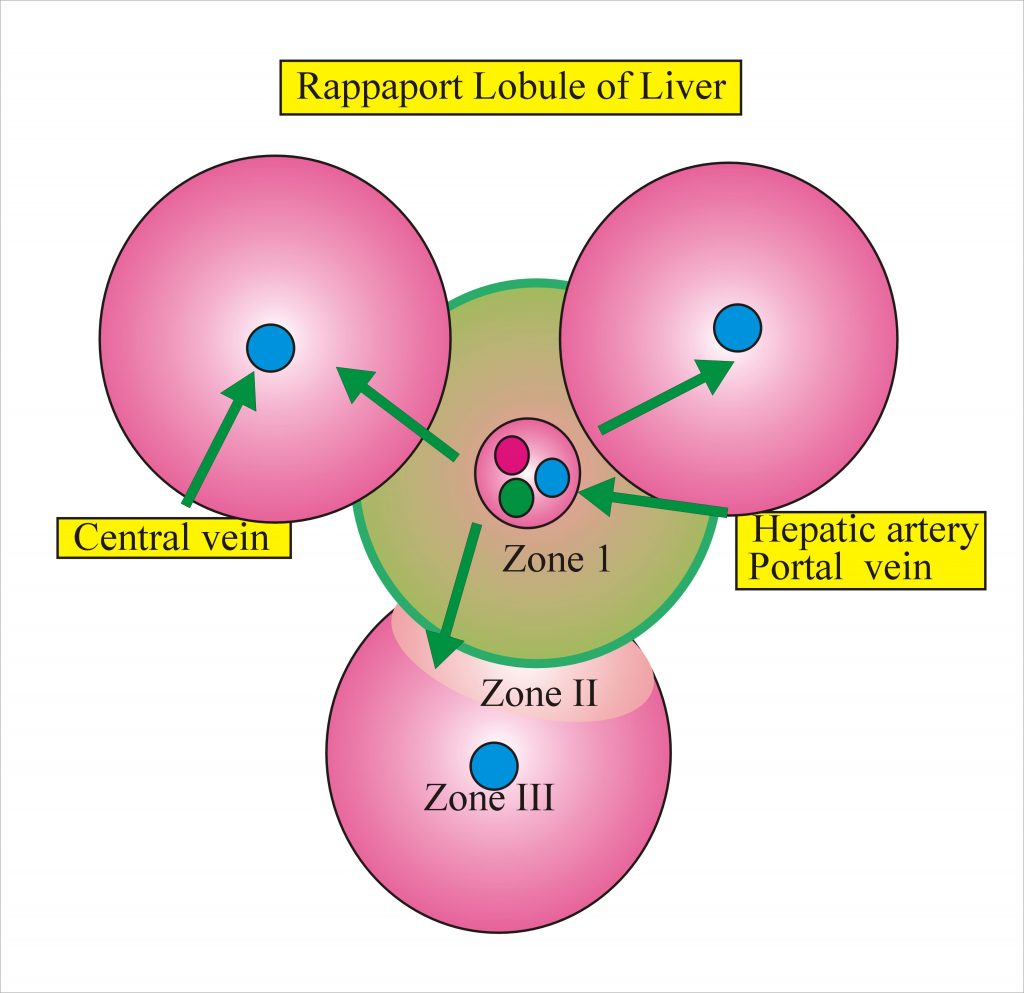 In the liver 80 % are hepatocytes. In 70 kg man, there are roughly 250 billion hepatocytes.

Limiting plate is the hepatocytes which line up the portal Triad.

Each hepatocyte is six-sided structure, in between, there is a sinusoid lined by endothelial cells. In between there are cells derived from monocytes, they can clear micro-organism and cancer cells. 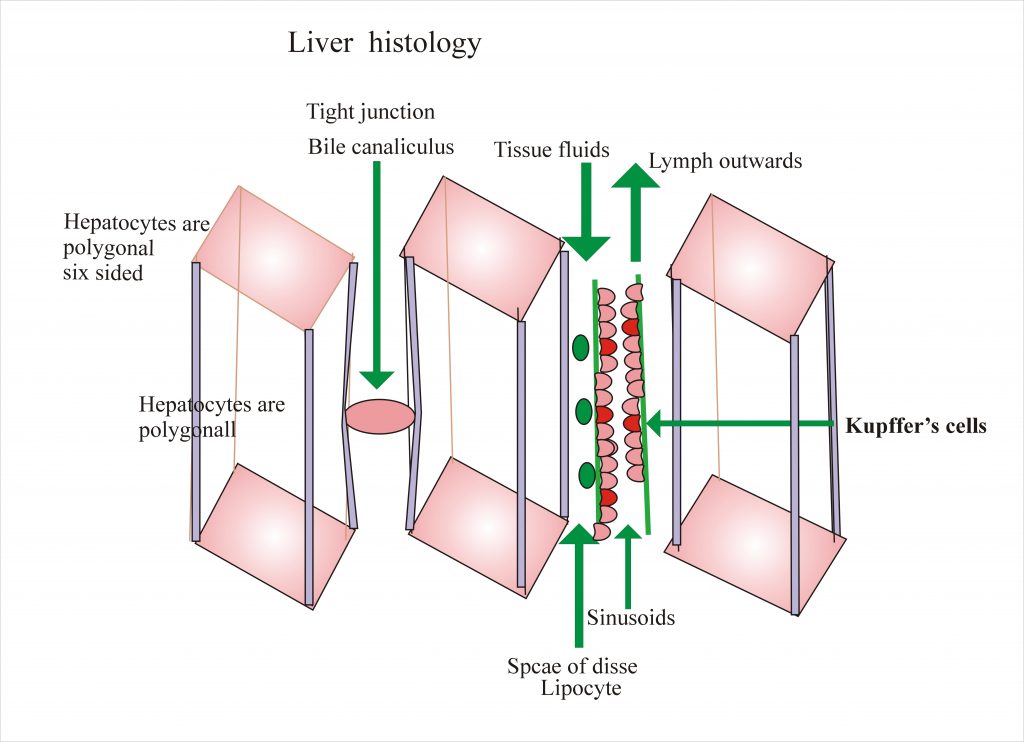 The bile duct is between the wall of two adjacent hepatocytes. This is basically a groove which continues with other grooves. In between the hepatocytes and sinusoid, there is a space called space of  Disse.  this is 300 to 400 nm wide. In this space, there is tissue fluid and lymph flows outwards. In this space, there are lipocytes these are called Ito cells. These lipocytes store fat and vitamin A.

This is an energy providing unit through the citric acid cycle. In this unit oxidative phosphorylation, beta-oxidation of fatty acid and heme synthesis takes place.

There is a synthesis of albumin, triglyceride, lipoprotein, G-6-PD,  Glycogenosis, specific protein for blood coagulation and enzymes take place.

There is bilirubin conjugation, detoxification, synthesis of steroids and Cholesterol and bile acid place. The synthesis ability is increased by phenobarbitone.There is an accumulation of glycogen and metabolism of drugs.

It is the packing site for lipoprotein and glycoproteins. It is filled with LDL.

It contains various hydrolytic enzymes. It stores ferritin, lipofuscin, and bile pigments, and copper. Because of the presence of enzymes, there is disposition and catabolism of endogenous and exogenous substances.

These cells belong to the reticuloendothelial system.  The Kupffer’s cells are the largest cells of the mononuclear phagocytic system.They can endocytose bacteria, endotoxins, effete cells and has a role in iron metabolism. These cells have a receptor for Fc portion of IgG, C3b, receptor for insulin and glycogen.

These cells have Fc receptor. Determine the exchange of fluid and particulates from space of Disse and hepatocytes.

Lipocytes are also called as Ito cells and they store vitamin A and other fat-soluble vitamins. Lipocytes takes an active role in fibrogenesis and may lead to cirrhosis.

These are lying in the space of Disse. These may play an active role in portal hypertension. 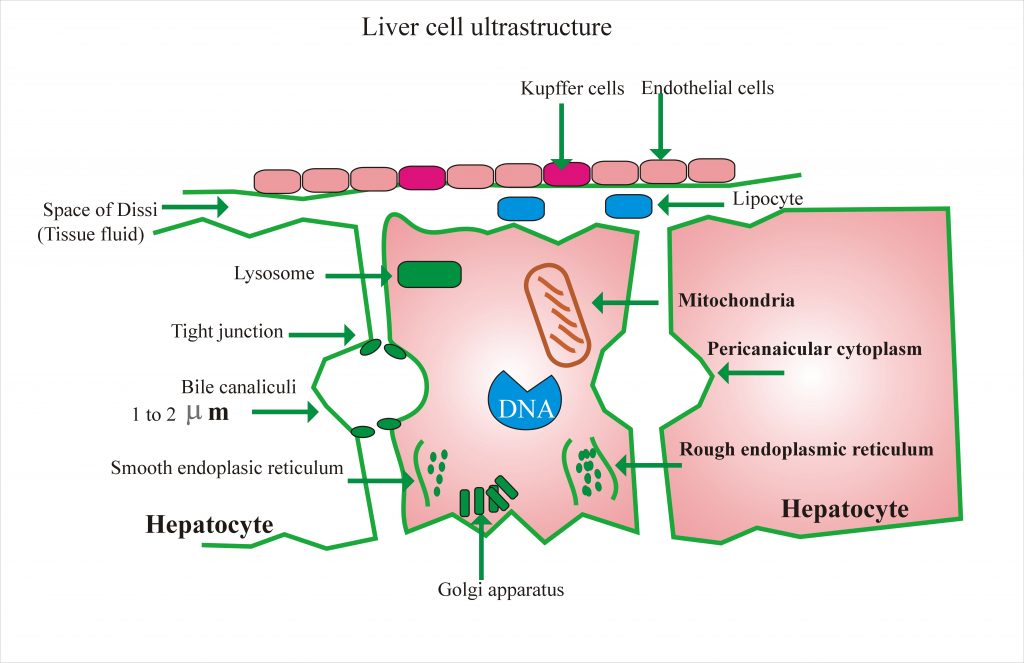 This ultrastructure of the liver cell  can be elaborated better by the following diagram. 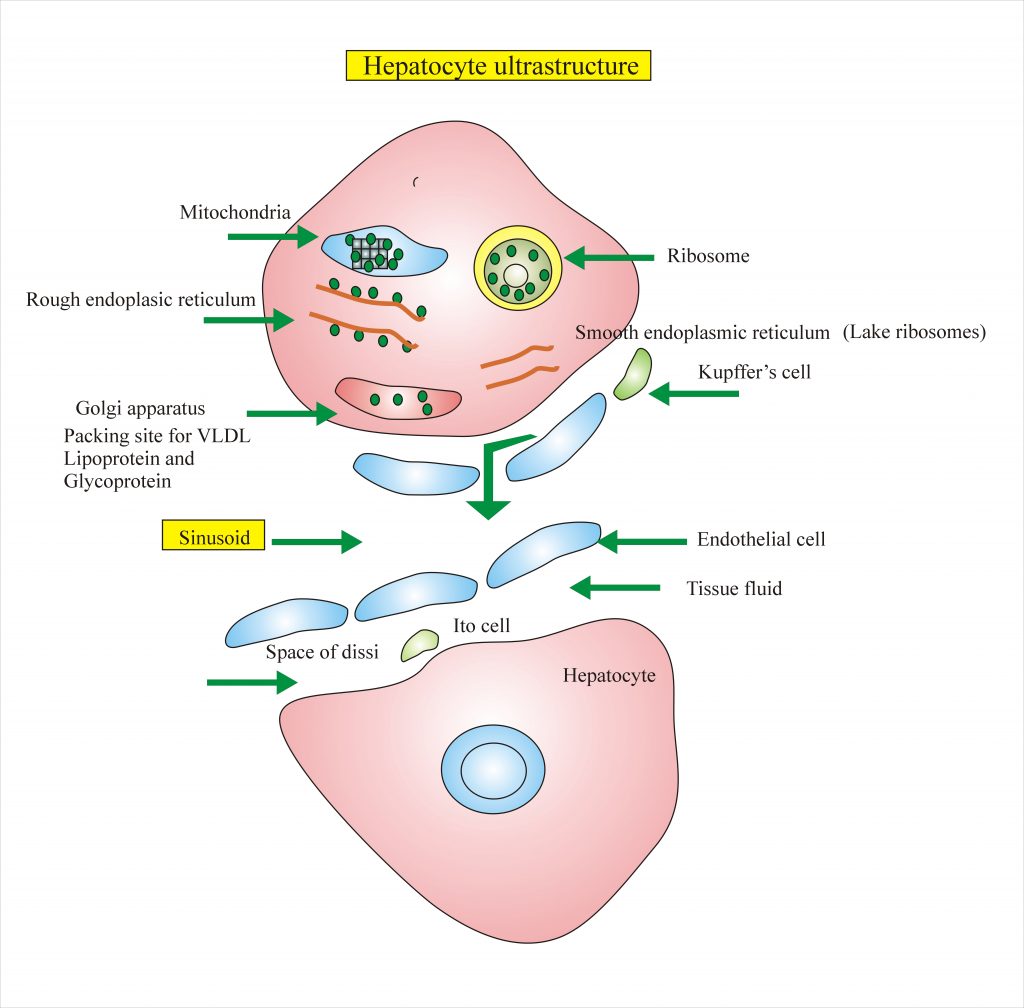 Plasma membrane and the membrane Traffic

The plasma membrane is rich in the receptors. This is the specific site for hormones and metabolites. Most molecules enter hepatocytes through these receptors.

Function Of The Liver