This was discovered by Sir Thomas Hodgkin in 1832. But nobody gave any attention to this discovery.

Wilks rediscovered in 1856 this disease and gave his name.

Jackson and Parker divided Hodgkin’s disease in 1944 into :

Luke’s et al gave another classification in 1966 which correlate with prognosis.

There is a suggestion for the origin of Reed Sternberg cells from B cell or T cell or Histiocytes. 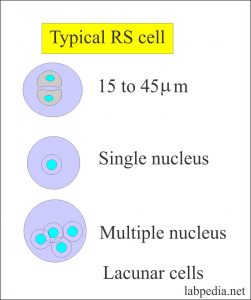 Inflammatory cells accumulate due to the production of cytokines by the Reed Sternberg cells.

Other cytokines detected are :

Jackson and Parker classified in 1944

Luke’s et al classified in 1965 which was based on Lymphocytes and histiocytes.

There is An Arbor staging system given in 1971 by Carbon, P.T. et al

Stage I: There is a single lymph node or extra-nodal organ or site.

Stage II: Two or more lymph nodes region on the same site of diaphragm alone or with the involvement of contagious extra lymphatic organ or tissue (IIE)

Intestine with or without positive lymph nodes.

Stage III: Lymph nodes regions on both sides of the diaphragm which may include spleen (III S) and/or limited contiguous extra-lymphatic organs or site (III E S).

Stage IV: Multiple or disseminated involvement of one or more extra-lymphatic organs or tissue with or without lymphatic involvement.

Stage A and B are on the basis of signs and symptoms like fever, weight loss 10% and night sweating.

The host immune response depends upon the type of disease.

There is long term survival due to radiation and chemotherapy.

These patients may develop other malignancies like cancer of lung, stomach, and melanoma.