This is defined as a modified defect in cell-mediated immunity.

This is because of a virus leading to immune deficiency syndrome.

1983 – Researcher at Pasteur Institute in Paris isolated a retrovirus from a homosexual man with lymphadenopathy. The virus was called lymphadenopathy-associated virus (LAV).

1984 – The American researcher Dr. Gallo and his team proved that HTLV III was the cause of AIDS.

1999—one of the sources estimated 30 million cases in the world.

Worldwide reports of HIV are in more than 100 countries.

The incidence of HIV infection in 1994 North America, Europe, and sub-Saharan Africa is shown in the following table.

1996—There was an estimate of 10 million HIV infected people.

India—There are 4 million HIV cases, and this is second to Africa.

China—This country will have 10 million carriers by 2010.

The majority of HIV people, approximately 95% of total global cases, live in the developing world.

Some of these HIV viruses are listed in the following table according to their history and origin:

Transmission of the virus in various contacts:

HIV is a fragile virus and cannot survive for a larger period outside the body, so:

Pol forms polymerase, reverse transcriptase enzyme, and other enzymes like protease and integrase.

Env forms envelop proteins, which are necessary for the interaction and penetration of target cells. These are gp120 and gp41.

Other genes, e.g., ZaZ, γeγ, and nef, have been identified as having a regulatory effect on viral assembly and drugs that modulate their function.
Location of the HIV proteins and gene:

HIV infecting other cells on E/M:

Virus buds out of the cells and on electron microscopy show virus bud. This has a double layer envelops, a dense core, and a less dense intermediate layer.

HIV life cycle  can be summarized:

The life cycle of the Human immune deficiency virus (HIV):

The dose of HIV Infection

Exactly not known but estimated as 10-100 viruses may cause infection.

Clinical Features of the HIV Infection

The incubation period is variable from 3 weeks to 6 months and, in some cases, even up to many years. 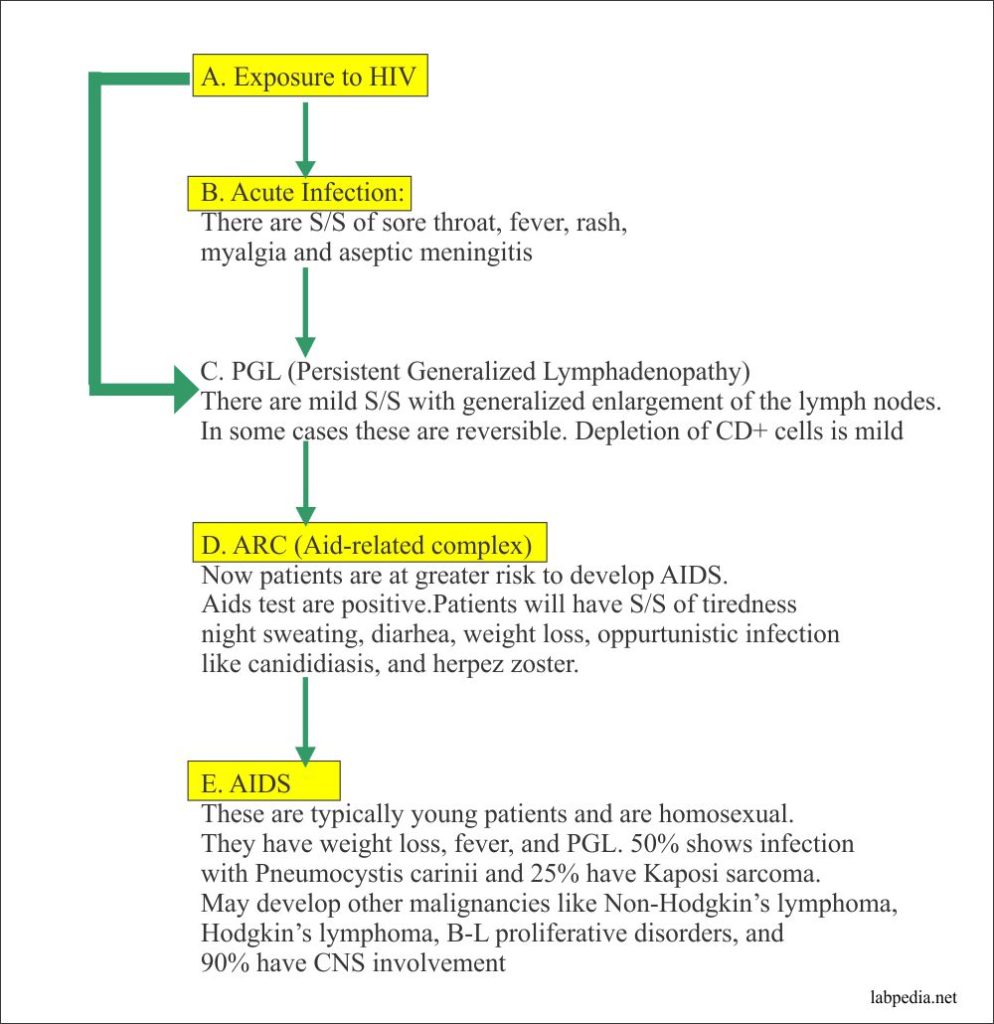 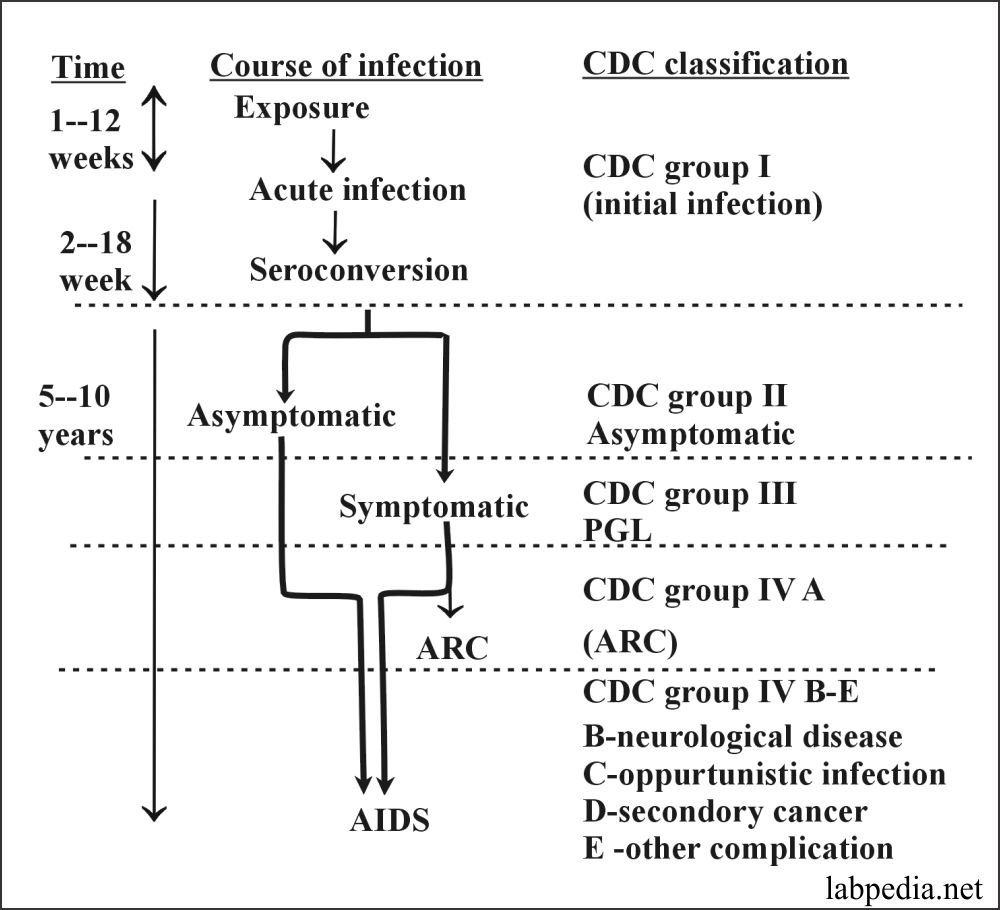 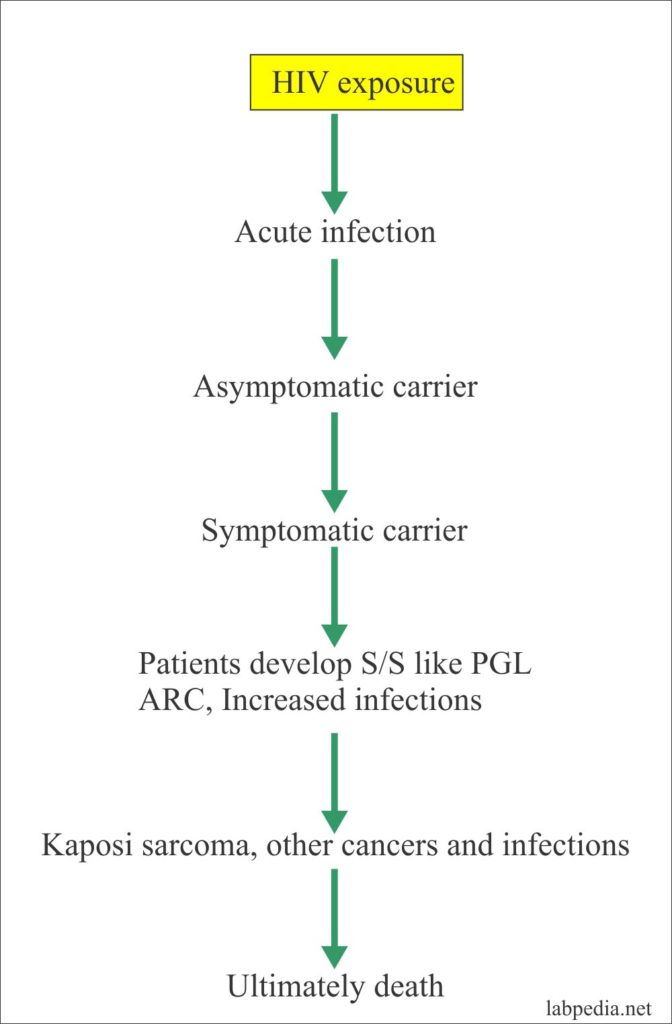 Fig 155: Spectrum of the AIDS patient

Classification and Staging of HIV-Infection:

CDC Classification: This divides these patients into different groups.

Destruction of the Immune System 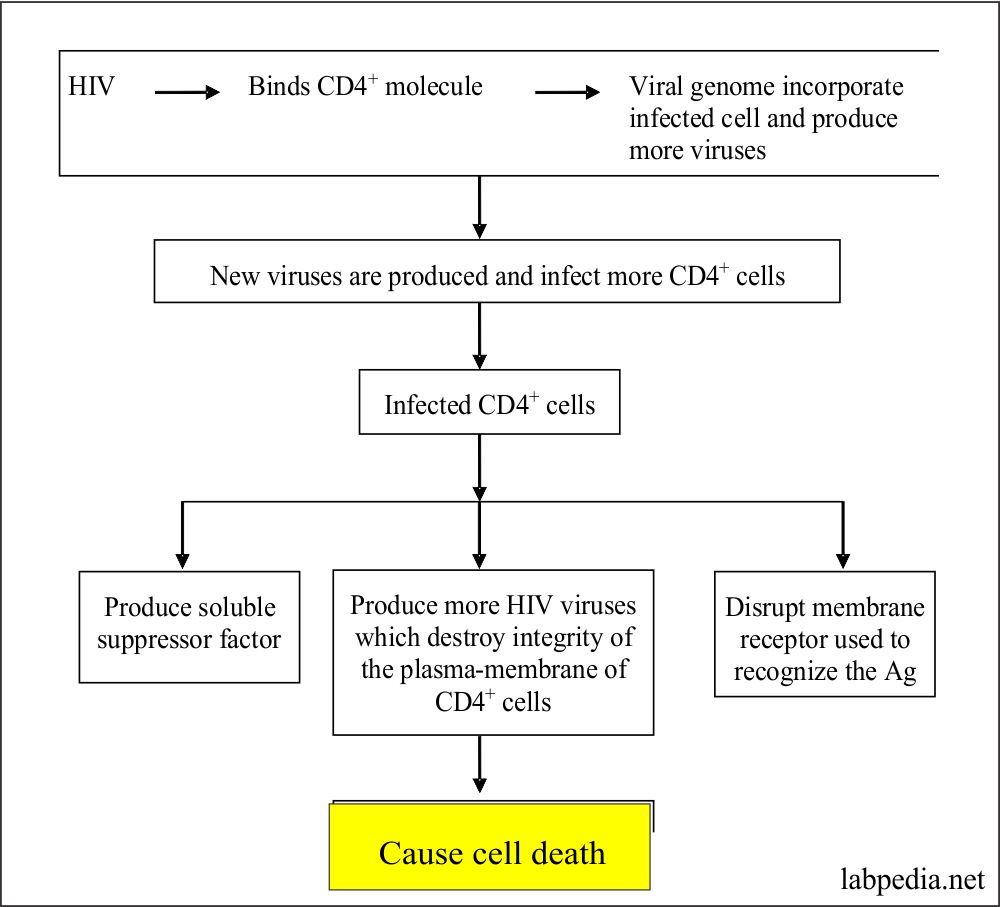 It is believed that the HIV-infection of CD4+ T-lymphocytes cell lines can lead to cell death. There are two mechanisms for this cell death.

These cells are important in protection against HIV-infection. 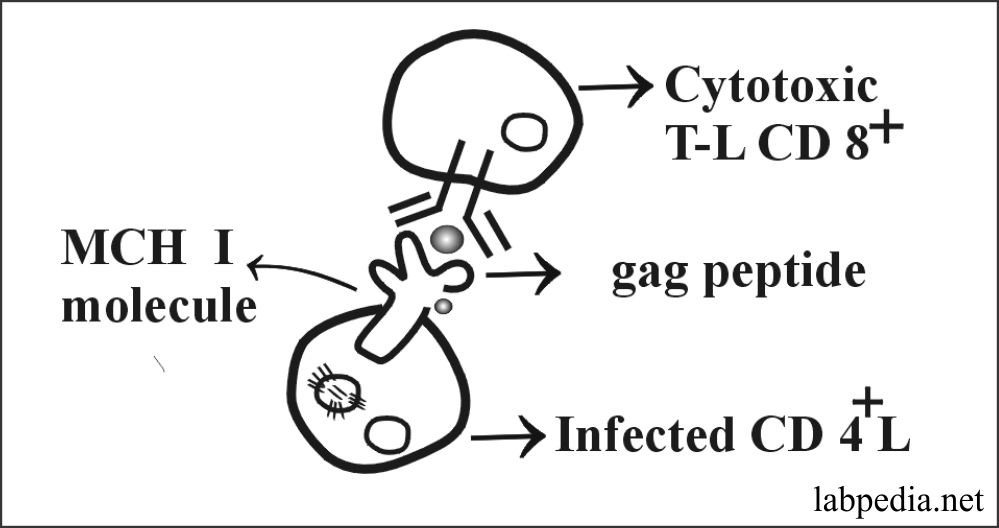 Two or more findings are needed to suspect HIV.  If sign and symptoms persist for more than 3 months like:

HIV diagnosis has to be confirmed by laboratory findings.

Other supportive tests are:

The following diagram shows the situation of the level of virus and antibody against the virus antigen. It also shows the state of CD8+ cytotoxic cells.

Summary of the HIV infection: 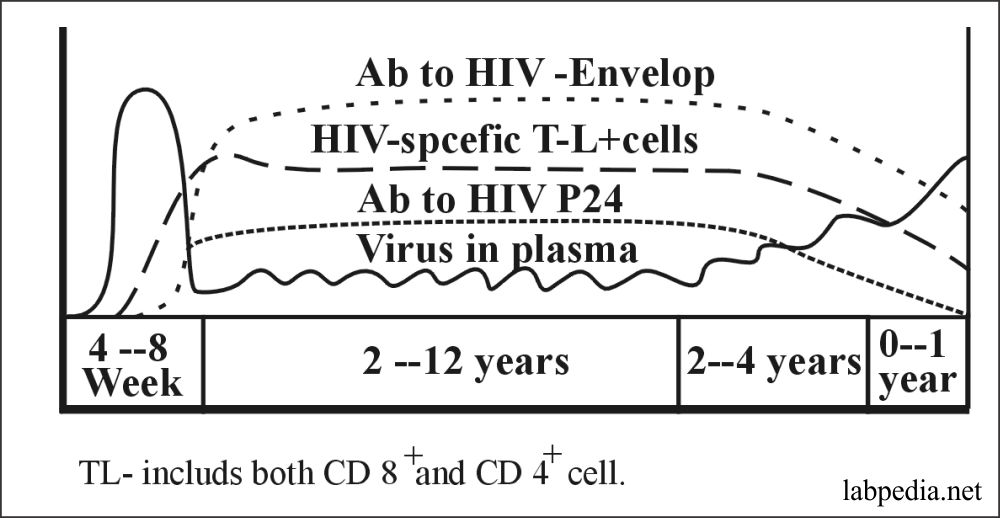 After acute infection, CD4+ T-lymphocytes start gradually declining. Although in the beginning, CD8+ T-lymphocytes and antibody against viral antigen remains at a high level.

Eventually, the antibody and CD8+ T-lymphocytes also fall, and progressively more HIV-appears in the peripheral blood.

Other sources say that there are 2464 reported HIV positive cases and 286 AIDS patients.

HIV-is not destroying because of:

Thanks for the comments.