In Type-IV Hypersensitivity, there is no role of Ab and no role of complement.

This is mainly dependant on T-lymphocytes activity.

According to Coombs and Gel, type IV or delayed hypersensitivity reactions occur in more than 12 hours to develop and involve cell-mediated immune response (through T-lymphocytes). They are not dependant upon the antibody formation.

Type – IV reaction is characterized by cellular infiltrate, composed mainly of lymphocytes and macrophagic cells. This inflammatory infiltrate appears at least 24 hours after the challenge with the provoking stimulus. The macrophagic cells in this lesion frequently fuse to form giant cells and epitheloid cells.

This reaction is mostly due to organisms that grow in the cell and resists killing, e.g., T. bacilli, viruses, and fungus.

This reaction may take place by the Single Antigen (Ag) challenge. 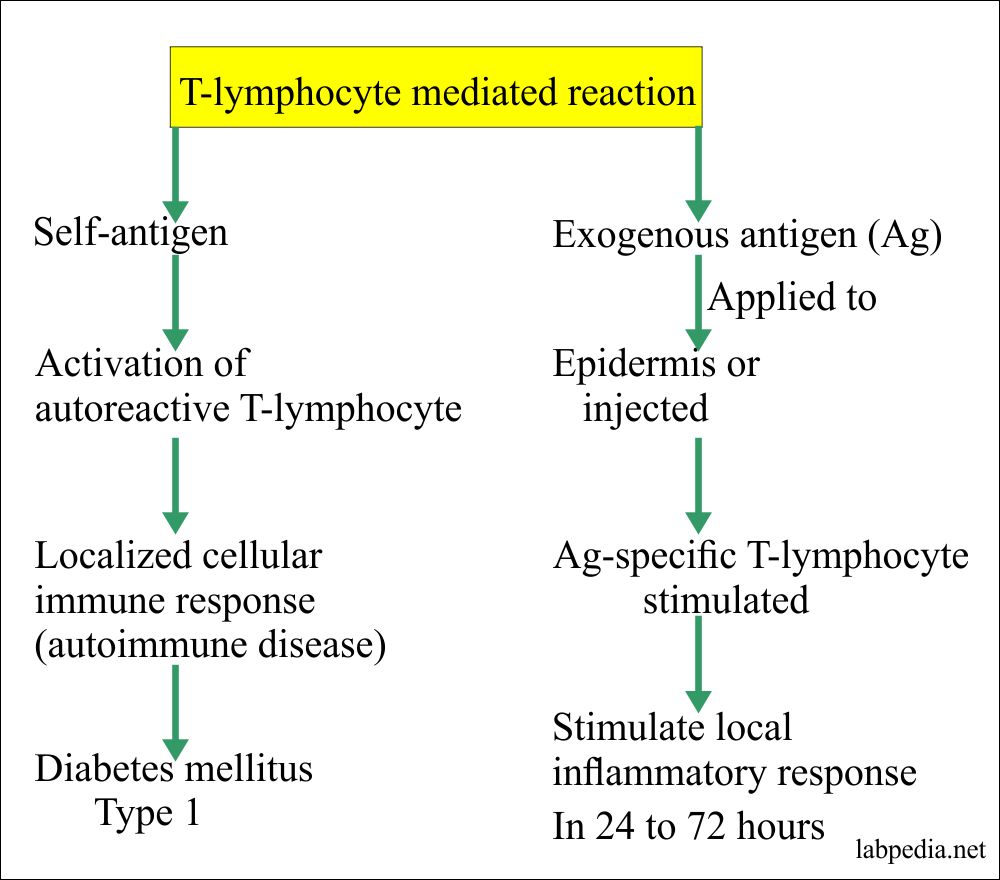 The delayed reaction may be divided into the following four categories and Reaction appearing within 72 hours.

Summary of the tuberculin hypersensitivity reaction: 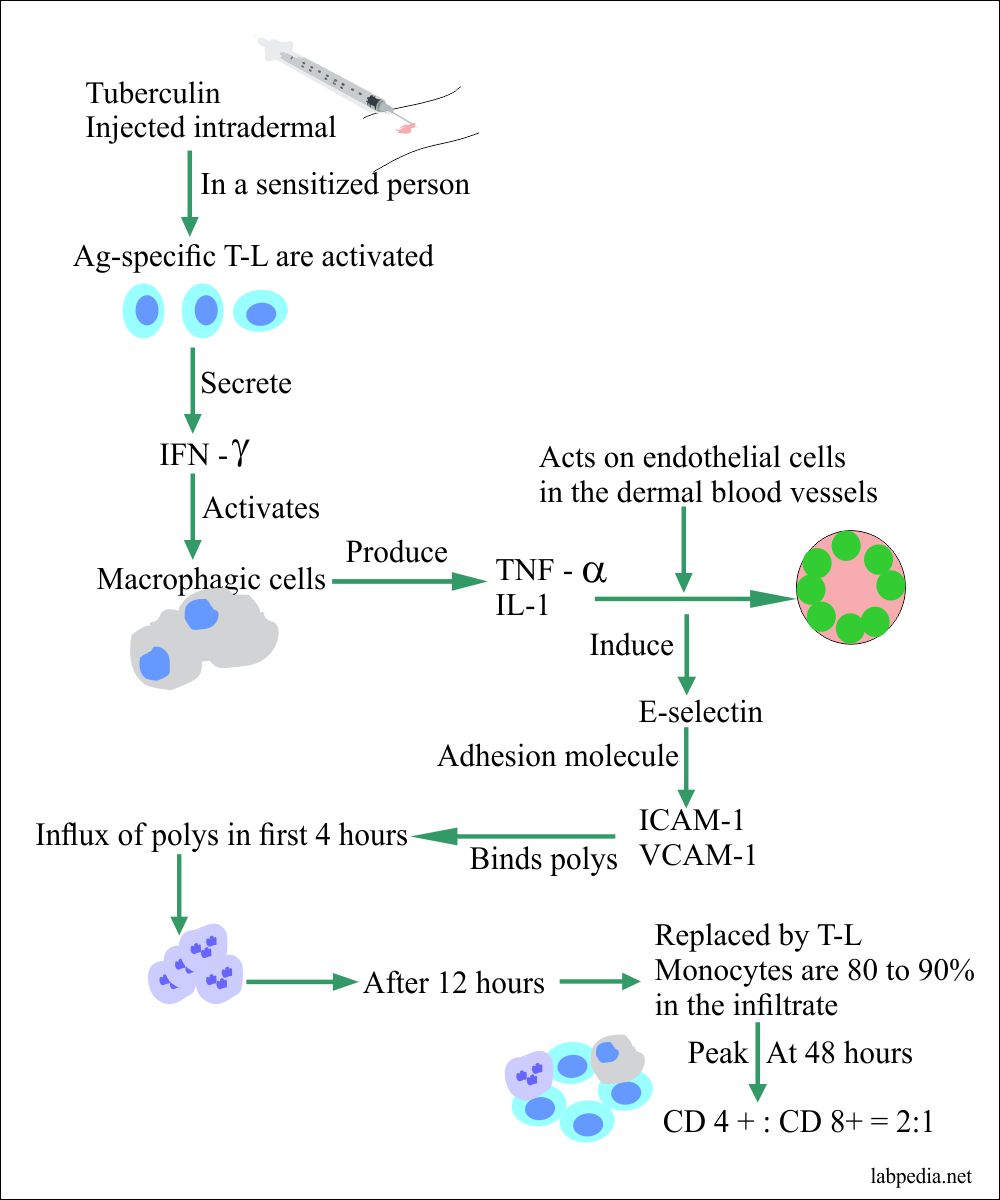 Type IV reaction, a summary of the intradermal tuberculin injection

This phenomenon was first observed in 1810 by Jenner in response to cowpox reinoculation and was later developed by Koch and Von Pirquet in response to tuberculosis.

Robert Kock in (1843 -1910) injected Tubercle bacilli into Rabbit. The rabbit developed signs and symptoms after 2 – 3 weeks as follows:-

When later on, this immunized Rabbit was exposed to tuberculous bacilli. He showed only induration after 24 hours, and peak reaction was between 48 to 72 hours. 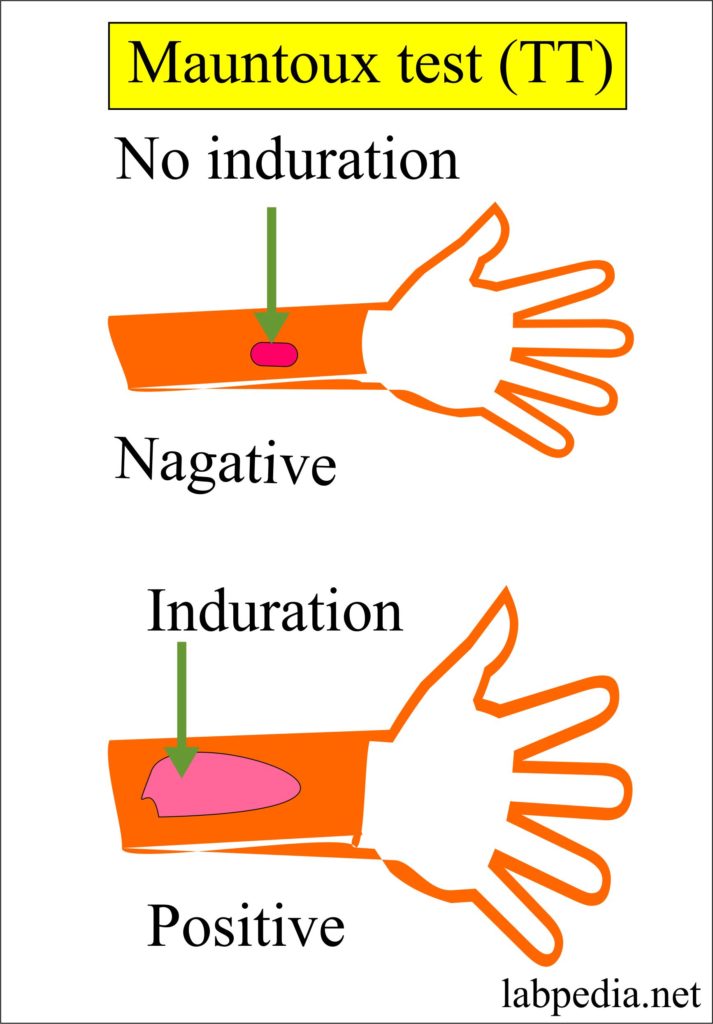 False-positive results are seen in:

False-negative results are seen in:

The mechanism can be explained in two ways:

A. This was described by Dumond, who gave the name to different lymphokines produced by the activated CD4+ T-lymphocytes (Inflammatory cells – Th1).

B.  Antigens, after processing by APC when presented along with MHC-II molecule, stimulates CD4+ (Th0), which in turn transforms to Th1, which gives CMI and Th2, which stimulate B-L. Another possibility is that if APC presents Ag along with MHC-I, then CD8+ cells are stimulated. These events can be summarized: 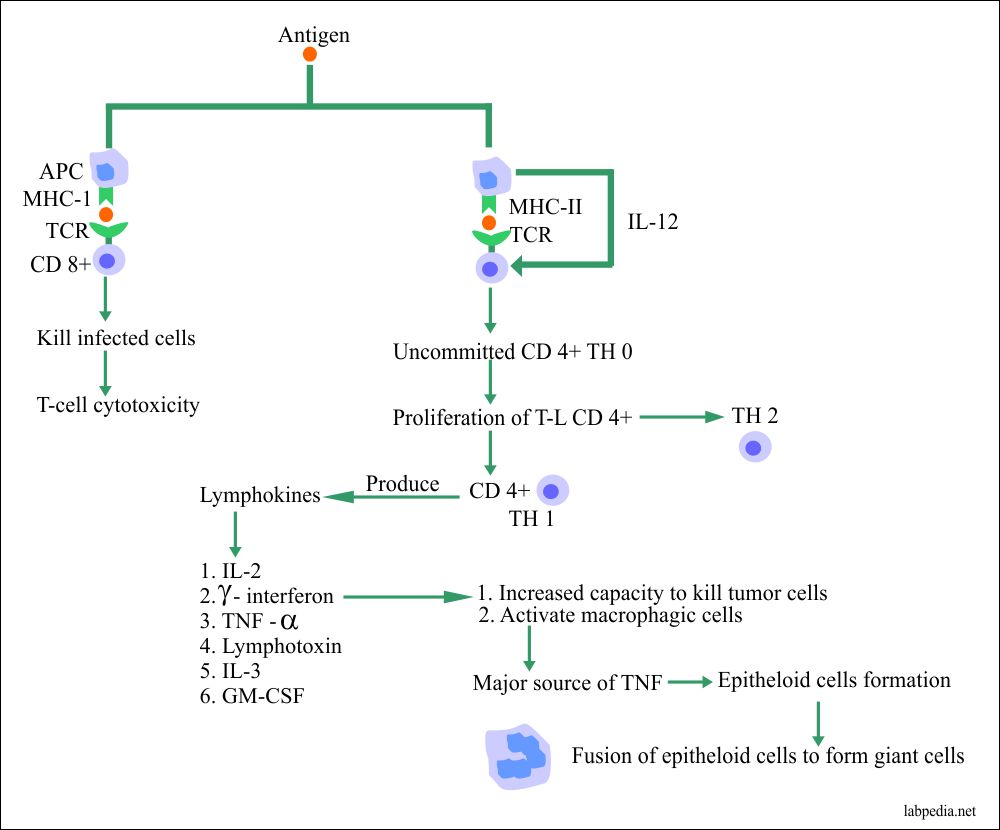 All the above (1, 2, 3) functions ultimately lead to extravasation of lymphocytes and monocytes at the site.

Summary: The Mechanism of Type IV CMI can be summarized as Follows.

Mainly type IV CMI is by activation of CD4+ Th1 cell, which gives rise to granuloma formation, by the release of lymphokines. The major role is by the TNF. In the absence of TNF, granuloma fails to develop. 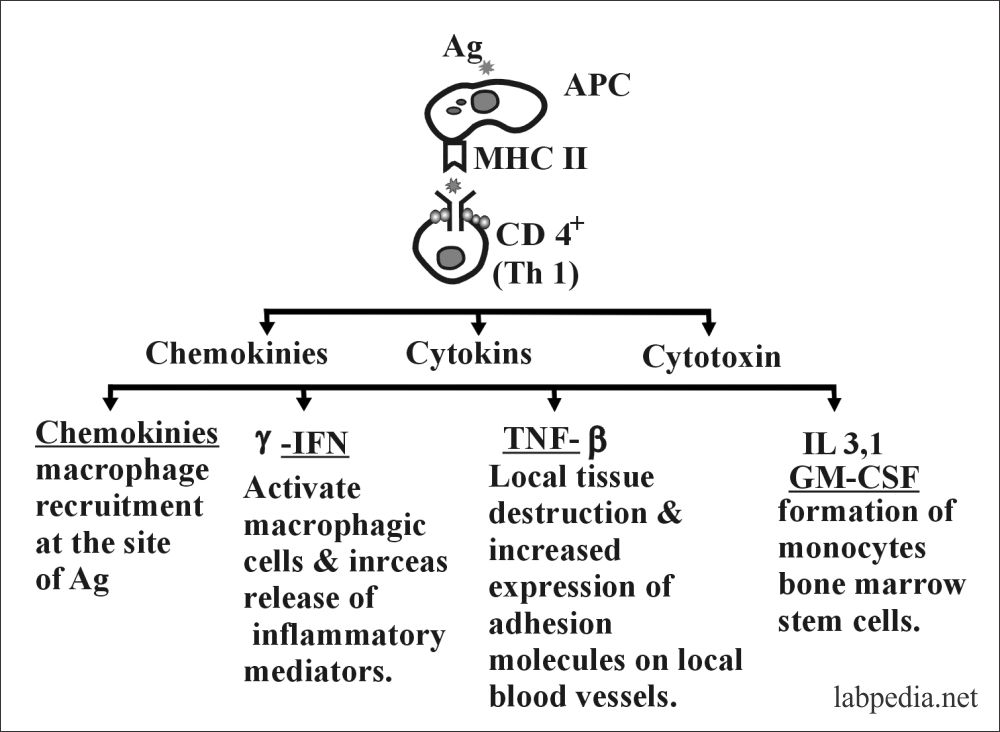 Tc cells cause lysis on cell contact, and there is no killing of bystander cells. Because the lytic molecules are released only at the site of TCR contact.

Tc-cell Cytotoxicity is important in:

There is a killing of the target without phagocytosis.

This may take place by means of:-

In tuberculosis, there is a balance between the activated macrophagic cells in two ways:

What is the Difference between Necrosis of Type – III Immune Complex Disease and Type – IV CMI?

Type – III necrosis is dependant on complement and neutrophils, while type IV is dependant upon T-lymphocytes and macrophages.

The Differentiation of the hypersensitivity reactions: 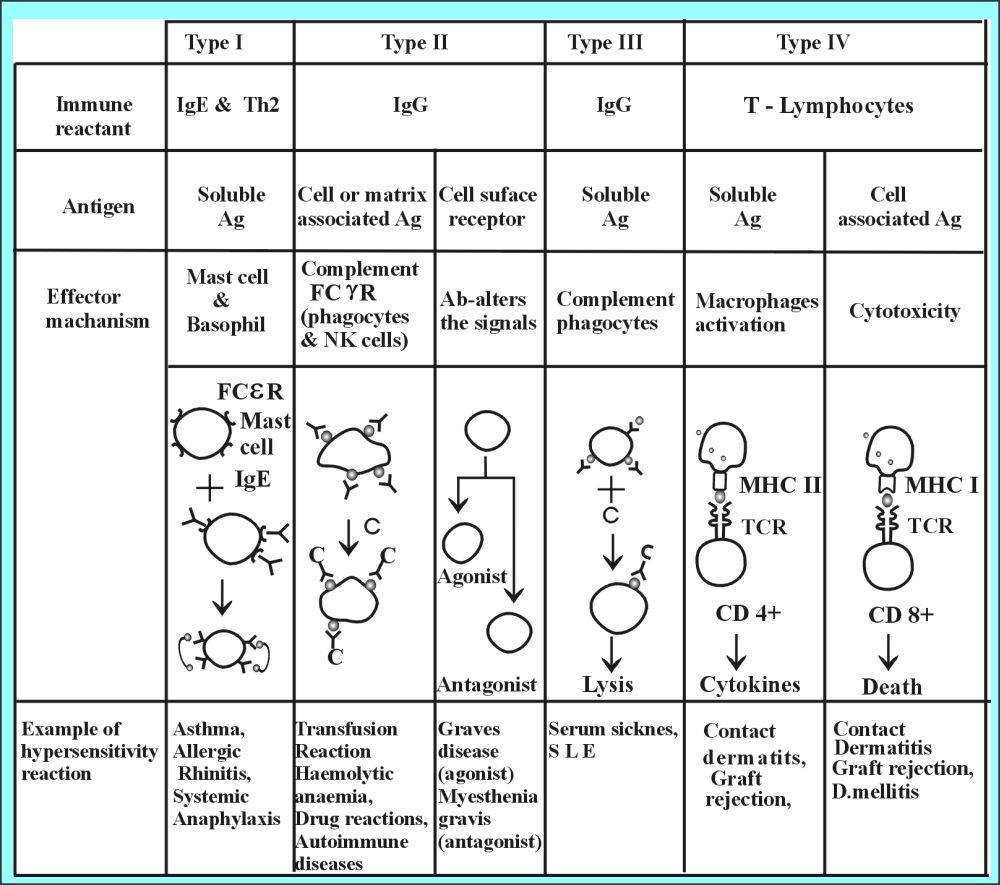 Comparison of the hypersensitivity reactions:

Type of Hypersensitivity reactions and their immunologic mechanism:

Go Back to Elementary Immunology

This chapter is from the Elementary Immunology book originally published by Prof. Dr. Riaz A. Bhutta in 2006, and is being continuously kept up to date.